Below you will find match reports and photos for completed fixtures. You can also view up to date league tables.

HEATHLANDS FINISH 2nd!
On Wednesday 30th January, a team of sixteen children across years 5 & 6 competed in the Sports Hall Athletics finals at The Essex University. Each child performed exceptionally well throughout, whilst achieving an incredible 2nd place in what was a very close competition, just missing out on representing Colchester in the county finals. The children thoroughly enjoyed themselves, and showed great encouragement and sportsmanship to one another as well as the opposing teams.

HEATHLANDS 1 - 2 PRETTYGATE
On a cold Winter’s day on the 24th January, we travelled to Prettygate school to play a football match. Benjamin S, Ayo A, James M, Adam R, Lewis P, George M (Year 6s), Orlando and Ollie (Year 5s) and Benjamin R (Year 4).
Everybody played their best against a difficult side and we came out with a 2-1 loss. Benjamin R scored our only goal which gave everyone more enthusiasm to carry on. Despite losing we all really enjoyed it and had a great time, representing our school. Special thanks to Mr Hassard for arranging the match and to the parent helpers for driving.
By Benjamin, 6H

HEATHLANDS 13 - 0 NORTH
Ten seconds in and the first goal already! The more goals we scored, the more exciting it became!
North were very good and played well. It was freezing cold and we were not even allowed to wear gloves! 'Why?' I hear you ask. Mrs Carter said that it was something about a tradition that you can't wear them!
Our team was: Sophie, Grace, Daisy, Isla, Luke, Benjamin and Isaac. Daisy did very well because she scored six goals - I know right!
Overall we had very good teamwork and played well. We got throw ons a lot, there is one good thing about that, it helps us score goals, but one bad thing, because it was very cold when you hold the ball up in the air your hands get really cold!
I bet you want to know the score... Drum roll please: 13 - 0 to us! Yay! North did very well throughout the game. We also got biscuits and juice at the end in one of the warm classrooms. Thank you North.
​By Grace.

HEATHLANDS QUALIFY FOR FINAL!
On Wednesday January 16, our Sportshall Athletics team travelled to Essex University to take part in the heats, hoping to do well enough to make it through to the finals. All children taking part had enjoyed training, always looking to improve on their best, with a competitive event giving them the ideal opportunity to do so. Throughout the competition everyone was supportive of each other, cheering on their friends, congratulating them on their efforts. At the end of the competition the children found that they had qualified for the final and were delighted! They are now all looking forward to the final in two weeks time.

HEATHLANDS FINISH 10th!
On Monday 14th January, a team of six children from Heathlands (Issy, Sophie, Alexis, Hunni, Alfie and Max) travelled to Basildon Sporting Village to take part in a County Boccia competition. This was a competition Heathlands had never taken part in before, but one the children were very excited to be involved in. After getting used to the weight of the balls and how they travelled on a sportshall floor, all of the children played very well, dropping balls close to the jack and knocking others out of the way when needed. It was also a bonus to meet an Olympic Boccia gold medal winner, and even have the chance to hold his medal! The team finished 10th, a result they were very pleased with after a fun and exciting day.

On Thursday 13th December, we took a team of year 5 and 6 students to Shrub End to compete in a football competition. It was a tough event coming up against some strong sides, with the boys battling out a well deserved 5th place finish. The team competed well and enjoyed the morning of football. 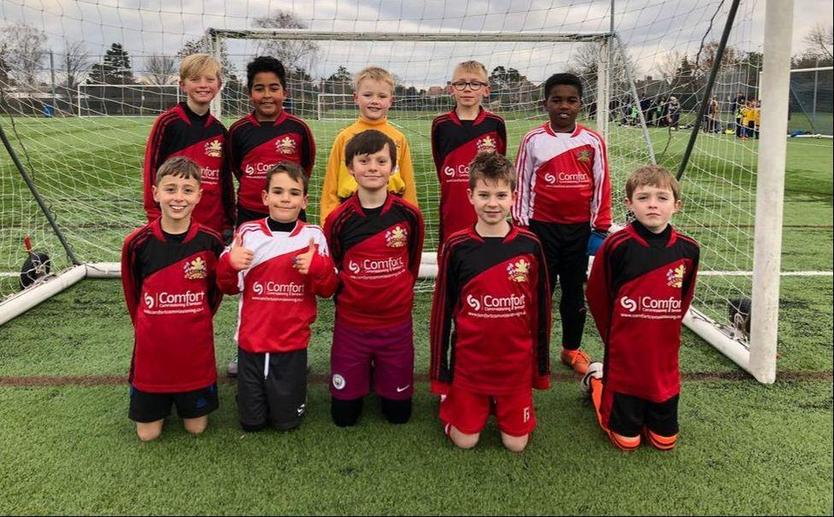 HEATHLANDS FINISH 2ND IN SPORTSHALL ATHLETICS COMPETITION!
On Wednesday 12th December, 15 children from Years 3 and 4 travelled to Essex University to take part in the first ever Year 3 and 4 Sportshall Athletics competition. This exciting event involves taking part in javelin, speed bounce, 5 strides and standing long jump before then competing in a series of relay races. All of the children that attended did fantastically well in their events and were always keen to improve on their personal best. These performances led to the team finishing in an impressive 2nd place. Well done to all of the children who took part

On Monday 10th November we took seven children from across the Juniors to a multi skills festival. This involved some new sports including; sitting volleyball, bocce, kurling and a variety of agility courses. The children had a great time throughout the event enjoying every second of it.

On Friday 7th November, a boys football team made up of year 5 and 6 children represented the school at the EFL kids cup. We played two rounds of fixtures against the same set of schools eventually making it through to the semi finals in horrible windy and wet conditions. Unfortunately this was where our journey came to an end. Throughout the competition the boys showed great sportsmanship and despite being soaked through they all enjoyed the event.

On the 3rd Decmber, a group of year 6 students were taken to Ipswich High School to compete in sportshall athletics. This was a great event for the children as they all got to give every field event a go. This included sports such as speed bounce, ball throw and indoor shot pot. After a small break we got to take part in the track events. The races that were competed in were a 1, 2 and 4 lap race as well as 4x1 relays and a 6 lap paarlauf. After lots of hard work the girls team came in a close second and the boys team ran out winners, resulting in an overall win.

Heathlands 6 - 0 Friars Grove
On Monday 3rd December, the school netball team went to Friars Grove to play their first game of the season. We played an amazing game, working together as a team the whole way through. Friars Grove made it difficult for us to get the ball and kept us on our toes. They were a great team, they played very fairly and worked just as hard as we did. It was great fun and an awesome experience; we can't wait for our next game. I am very glad to say the score was a wonderful 6-0 to Heathlands.
By Sophie.


After some quick passing and movement Heathlands opened the scoring  and took an early lead. Both teams enjoyed success in midfield with lots of chances but it was Heathlands who went on to win 4-0.


Well done to Millie and Holly for scoring their first goals for the school.

On 29th November, two teams from Heathlands took part in the CBSSP dodgeball competition. Dodgeball is a frantic sport with three balls in play and children needing to be constantly alert. Both teams dodged, dipped, ducked, dived and dodged, as well as catching a few players out as well. All of the children enjoyed taking part and despite their best efforts, didn't quite make the semi finals this time around. Well done to all of the children that took part.

After winning the Colchester Blackwater finals our girls football team travelled to Chelmsford to compete in the county finals.


This was a very tough event with some amazing teams. Heathlands played fantastically and learnt a lot but unfortunately didn't qualify for the knockout stages.


All the girls had lots of fun and enjoyed the event despite the freezing temperatures.

HEATHLANDS WIN 'B' AND 'C' FOOTBALL COMPETITION
On Monday 19th November, two football teams from Years 3 and 4 travelled to Littlegarth to take part in a competition. It was an especially cold day with the wind and rain making it feel even colder, but all of the children who took part had a great time. Both teams played impressive football, always looking to keep the ball as a team and scoring some fantastic goals. As a result of their good play, both teams made it through to their group finals, both of which were against Littlegarth. Both finals were enjoyable to watch with more fantastic football with Heathlands winning the 'B' and 'C' competitions. While it was great to see the children enjoy winning this event, it was more enjoyable to watch children having fun and looking to play attractive football. Well done to all of those that took part.

As we arrived the sun was shining and we were all excited to get under way.

From the outset we worked as a team with early passing from Catherine and Millie and we tried to counter our opponents, having good success with goals from Poppy, Hollie and Chloe. Amazingly, we won all the games in our side of the draw.

In the semi finals we met a well organised team from Lawford and it was a very close game but we didn’t give up and just edged it with a 1-0 win. This meant we were in the final against Kelvedon.

Again the final proved a tense affair with both teams playing some good football. In an amazing move we played the ball out-wide for Sophie to strike and score! This was enough to secure the victory and for Heathlands to win the tournament.

Next up- The county finals!!!

On 18th October, two teams of year 4 boys and girls took part in a Year 4 and 5 football competition at Ipswich High School. All of the children were excited to play against other teams as well as being a little nervous to find that most children taking part were a year older than them. Throughout the competition children looked to play good football, with some great defensive and attacking performances. On this occasion neither of the teams made it through to the final group, but all enjoyed the opportunity to play competitive football and were keen to represent the school again in the future.

On Friday 5th October, we took two year 5 teams to a football competition at Shrub End. Showing a great sporting attitude towards not only their own teams but all other schools at the event. After competing strongly throughout the tournament against mainly year 6 opposition, we came away with one team finishing in 5th place just missing out on progression to the next round, the other team finishing in a strong 8th position. Well done to all those involved!